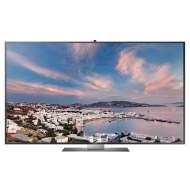 …the F9000 is a television built for the future; and well ahead of its arrival.

Samsung’s F9000 is an outstanding television. Then again, so is the F8000, which happens to cost about $1,700 less online. The big differences are the ability to take advantage of 4K material when it comes available and an easy upgrade path via...

The irresistible rise of UHD continues with this 65-inch beauty.

Audio is only average ; Smart features can be confusing at first ; Care needed with picture settings to get the best results

Finally we would strongly recommend reducing the set’s backlight output to below 10 if you’re watching in a dark room, to avoid backlight clouding.

The Samsung UNF9000 could be one of the best 4K TVs on the market, but its high price and the low impact of its 4K resolution make it very difficult to recommend.

But if you just Want A 4K TV Now, Damn the Caveats! (™), the Samsung UNF9000 series is as a good choice as any. Its picture is superb for an LED-based LCD -- and LCD happens to be the only TV technology that can deliver 4K resolution to the market now....

The UE65F9000 is a good rather than great set, but it's extremely well equipped – particularly when it comes to smart features

The Samsung UE65F9000 is without doubt a talented set. It’s a well thought-out product with very few weaknesses. Even its sound quality is better than most.

Samsung may have been beaten to the 4K/UHD drop by Sony, but it's not about to let its Japanese rival hoover up all the early-adopter UHD action. Not long after Sony's 65X9005A lit up our test benches, Samsung's debut ‘mass market' UHD set, the...

Dynamic and Natural presets look noisy; some aspects of the Smart TV interface are confusing; minor judder with 3D

The UE55F9000 isn't necessarily better than Sony's X9005A 4K models, but it's certainly just as good, simply offering a surprisingly different approach to the undoubted joys of UHD.

Want an awesome, high end 4K resolution TV for your home entertainment center without having to completely break the bank on buying it? The Samsung UN65F9000 might just be the ticket for you. At a lowest online price of just under $3000 dollars, it's...

Reasonable price tag for a 4K TV from one of the best manufacturers on the market ; 3840 x 2160 Ultra High Definition resolution on a very big screen ; Outstanding 240 Hz refresh rate, fantastic for games, sportscasts and action movies ; Full Smart TV...

If you just want a great home entertainment system, get yourself a high quality 1080p/HD TV from Samsung or another manufacturer. With the money you save, you can go for an even bigger 85 inch screen and almost the same connectivity and Smart TV...

Intending on outperforming all other models in their LCD (LED-backlit) lineup, Samsung's flagship 65” 2160p UHDTV television delivers the same great image quality as their 8000-series 1080p HDTV but with four times the resolution capability. The finest...