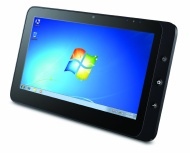 Hands on: ViewSonic's new capacitive touchscreen tablet offers you the choice between Android or Windows 7.

Connectivity, meanwhile, is good by tablet standards. Two USB 2.0 ports allow you to plug in anything from external storage to peripherals, while a mini-VGA port can output video to a TV or monitor. On the wireless front we have both Wi-Fi N and...

ViewSonic's 10-inch, dual-booting Windows/Android tablet has a lot of heart and lofty goals, and is an utter failure on nearly every front.

Android implementation is an utter debacle. Buyers should ignore it completely and stick with Windows. Buggy from front to back, and from boot to shutdown. Reviewer feels bad that someone may get fired because of this review

It may be priced competitively, but the ViewSonic ViewPad 10 it doesn't come close to competing with the best tablets available.

Is this dual-booting Windows 7 and Android 1.6 tablet any good?

Viewsonic's first seriously sized tablet, the ViewPad 10, gives a perfect demonstration of how little the right hardware really matters in this growing market.

We've been following the tablet news all through the new year and into CES. As expected, a ton of tablets were announced at the CES 2011 convention this year. Each one of them will come with faster processors with multiple cores in them. We've received...

The ViewSonic ViewPad 10 is a decent device that requires a lot of tweaking and work on it before it can be taken seriously. Priced at Rs. 38,000, it goes head on against a similarly priced Apple iPad. It's possible to get an 64GB Apple iPad in the...

While tablets such as Apple's iPad are continuing to attract popular attention, there are many workplaces that are still based around Microsoft Windows. Unfortunately, Windows 7 isn't really optimized for use in tablets, and it looks like the next...

At £425, the ViewPad 10 is £26 more than an iPad 2, is heavier, with less than half the battery life and has an awkward dual-booting system. It may provide an opportunity for businesses to keep using their Windows software while exploring Android. Most...

The ViewPad 10 is a tablet PC from ViewSonic, designed to steal some of Apple's thunder following the success of the iPad. As well as using Google's Android operating system, it also dual-boots Windows 7, so it blurs the line between tablets and laptops.

The ViewPad is an interesting attempt at a tablet that tries to appeal to fans of both Windows and Android, but it’s ultimately let down by software flaws in both operating systems.

ViewSonic is still trying to get some traction in the tablet space with their Android 2.2 Froyo powered ViewPad 7, but the manufacturer renowned for producing displays is pushing ahead with their latest creation – the ViewPad 10. Now this isn't simply...

The dual operating system means you can choose between Windows 7 and Android 1.6

The lack of application store will frustrate many