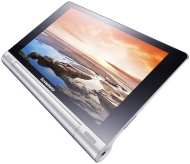 Lenovo's 8in Yoga tablet has been designed to stand on its own, and to be comfortable to hold

Screen could be better ; MicroSD card slot a little difficult to access ; Some of the software might be annoying

Lenovo's Yoga 8 Android tablet is a good one to go for if you want an 8in device that's easy to hold and which has a built-in stand.

The Yoga Tablet's innovative kickstand and 14-hour battery life are fantastic, but its interface is ugly and buggy.

We want to like this tablet, but we can’t. As much as we’d love to recommend a tablet because on it, if you’re going to spend a few hundred dollars for a new device, you want the best you can get for your greenbacks. This ain’t it.

A laptop hinge isn't something you're supposed to think about: it opens so you can use your computer, closes when you're done. The end. But Lenovo's turned its swiveling parts into a genuine differentiator: the Yoga range of Windows 8 PCs is powerful,...

Give me your stands, your cases, your awkward and precarious propping mechanisms

The Lenovo Yoga Tablet 8 is better than its 10-inch counterpart, but it isn't the best small-screen Android tablet out there, and it's more expensive than many competitors.

Performance and Conclusions The Yoga 8 is equipped with the same quad-core MediaTek processor, and since the display resolution is the same, performance is identical between the two. Head over to the Yoga 10 review for a full breakdown, but to recap,...

Lenovo added two tablets to its convertible Yoga line in fall 2013 with the Yoga Tablet 8 and Yoga Tablet 10 . Though they're aesthetically unique, with a design that features a rounded spine and kickstand, their identical internal specs, mediocre...

The tablet’s low-resolution screen is dull and the heavily modified operating system is downright ugly.

Though it feels well-built and has a handy kickstand, the Lenovo Yoga Tablet’s poor performance makes it hard to justify even at its low cost.

The Yoga Tablet 8 is one of Lenovo's biggest launches in 2013. Here's our review of the firm's latest Android tablet.

The Yoga Tablet 8 is one of the best-designed Android tablet's we've seen and costs a reasonable amount. However, mediocre hardware and performance prevent it trumping the competition.

We'll admit, we're smitten by the affordable cost attached to the Lenovo Yoga Tablet 10 – more so when it proves to give us one of the longest lasting battery life on a tablet. Well, if that's too much tablet for you to handle, there's always its...

It’s not the most grandiose thing, nor is it specs heavy either, but despite that, the Lenovo Yoga Tablet 8 has a wonderful mixture that easily appeases consumers who want something decent to use on the road – and without spending a fortune! Blessed...

Lenovo potentially has a really good tablet on its hands here. The rethinking of tablet design is both welcome and successful; it’s just a shame that the device overall has been saddled with such average specs and lacks real attention to detail. A few...