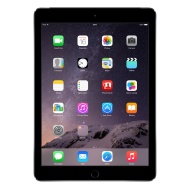 Hardware is a year old ; Expensive

The iPad Air 2 may have stolen all the spotlight, but that's not because of poor marketing planning. Apple did little to change the third generation of the iPad mini so it got little stage time. But it's not our job to decide which product gets the...

On its own, the Apple iPad mini 3 is great all-round tablet. It has everything a slate of its caliber should offer - a minimalistic design, an amazing attention to detail, an excellent display. All that backed by the fluid iOS 8 and the amazing App...

is not included in the iPad mini 3. It makes sense. Apple's NFC is limited to touch-to-pay and the iPad is too big and too clunky to be used as such a device. No big loss there. There’s one case where NFC would be useful on the iPad mini 3, and that's...

This is a fantastic iPad Mini, but it's a terrible deal. We recommend you buy a cheaper 32GB iPad Mini 2 and wait a year to get a fingerprint sensor.

If you’ve made it this far, you’ve probably noticed that there’s almost no incentive to buy the iPad Mini 3. In fact, it’s a much better deal to buy the second-generation Mini instead, since Apple cut its price by $100. You can get an iPad Mini 2 with...

It's almost a case of déjà vu with the iPad mini 3, but despite its lack of any real update, it's still the 8in tablet to be reckoned with

For the past few years, most of the technology world has ruled by a cold, hard truth: to get the best thing, you pretty much had to get the biggest thing. Every Android phone was bigger than the...

The Apple iPad mini 3 is a superb small-screen tablet, but you can get essentially the same experience from its predecessor for $100 less.

Conclusions The Apple iPad mini 3 is a superb small-screen tablet, but the modest upgrades, combined with a healthy discount for last year's nearly identical model, make it difficult to recommend wholeheartedly. The mini 2 is 25 percent less expensive...

The Air 2, original Air, Mini 2 and Mini 3 will support the operating system's new picture-in-picture functionality. And yes, these are features that have been around for quite a while on competitors' tablets such as the Samsung Galaxy line and...

Though we're disappointed by the lack of upgrades, Apple's smaller iPad is still a great choice. Both the display and battery life are excellent, and the addition of Touch ID takes care of our biggest complaint from the previous version.

Other than a gold option and Touch ID, the iPad Mini 3 is identical to its predecessor. It lacks the processor and camera upgrade of its big brother, the Air 2, and it's still priced at the high end for midsize tablets.

One of 2013's best, the iPad Mini 3 is still a compelling choice despite the lack of upgrades. However, the nearly identical and significantly cheaper iPad Mini 2 is a smarter buy.

This is the iPad mini you've been waiting for.

Gorgeous 2048 x 1536 pixel display. 10-plus hour battery life will more than serve your cross-country plane flight, or close to a week of casual daily use. A7 processor (with M7 co-processor) offers more power than you may ever need on a 7-inch tablet....

Pricey---similar sized and specced tablets go for closer to $200. Stereo speakers both located on one end of the device. Would be nice if it had better networking capabilities

A ‘new' tablet with a distinct lack of upgrades

Too similar to mini 2 ; Pricey compared to last year ; Not as powerful as Air 2